This strip was the first thing I’d coloured digitally in well over a month. It went smoother than I was expecting, to be honest – with the palette now pretty firmly set, I guess it’s easier to pick up after a long time off than it would have been earlier in the comic.

The Hockeypocalypse Kickstarter has passed its funding goal, so it’s Employee of the Week again, and will be until the campaign ends and I can send the book off to the printer.

Next Week: It’s the start of a new day, but the New Day. Read it early on Patreon. 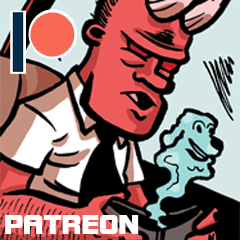